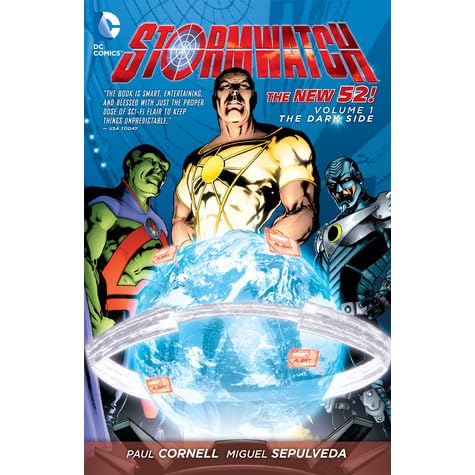 There still must have been a Jenny for every century, right? Review: Stormwatch Vol. For fans not even of the original Stormwatch necessarily, but of Stormwatch 's bolder, edgier, more popular sibling The Authority , the title page of the DC New 52's first volume, Stormwatch: The Dark Side , is the realization of all the hope that followed DC Comics's announcement of the revamped title as part of their relaunch.


Apollo, Midnighter, the Engineer, Jack Hawksmoor, Jenny Quantum, and randomly yet fittingly Martian Manhunter sit around a table peering at threats to the earth below. Call it what you like -- this is the Authority come to the DC Universe, and that's a good thing even if the concept must necessarily be watered down for mainstream consumption. Writer Paul Cornell succeeds in what feels like a two-hour television pilot for Stormwatch. The story is clumsy at times, accidentally and also in the way Authority had of running at top speed and leaving the reader to keep up and fall behind.

There is however great joy in seeing these characters together, and what Stormwatch offers is something that can't be found anywhere else in the DC Universe; those facts alone argue for this title continuing through its second collection and beyond.

But the first few issues of Dark Side clunk along not quite smoothly, and that's troubling for a new title. There's a rather fearsome image of the moon attacking the earth that turns out to be "just a picture," not actually representative of the threat at hand, kind of a tease to the reader. On one hand team members essentially state their powers aloud for no reason other than the writer needs it; on the other, the story starts with babble about an alien horn, a "Moscow mission," and the threat of the moon, with little background for the reader to grab hold of.

This second item is less a problem than the too-obvious dialogue. It is not unlike Authority to start in the middle of things, whether a sudden attack by clones or Sliding Albion. But Cornell confuses things when character Adam One asks what "blew" the alien horn, when it's never quite clear that anything played the horn at all nor whether it simply appeared in the Himalayas, crash-landed, or what happened.

The difficulty with some DC New 52 premieres is that, in an effort to tell one whole story in the collection, the writers double-back over the same plot points; Green Lantern: Sinestro is somewhat guilty of this, as is Justice League International: The Signal Masters. Had The Dark Side dealt with the moon-beast Scourge of Worlds through all six of its issues, it would fall into this category too, but Cornell smartly turns to something completely different for the final two.

The murder of the team leader by Stormwatch's ruling Shadow Cabinet, the betrayal of a teammate, and a conflict with the team's own ship packs a lot into the final issues, and makes this book about more, ultimately, than heroes fighting a monster. It is perhaps too much for the reader to hope that this refers at all to the old Milestone Shadow Cabinet title, but it's promising to see Cornell innovate and not feel compelled to follow either Stormwatch or Authority 's old rules to some extent this Stormwatch greater resembles the Authority just as the UN-chartered Justice League International better resembles Wildstorm's old Stormwatch.

Also the Authority had captured and tamed their sentient hyperspace headquarters off-screen prior to the series' start, so it's interesting too to see Cornell take up a "lost moment" from Authority to have Jack Hawksmoor and Stormwatch actually have to negotiate terms with their headquarters here and now. Though largely a Doctor Who writer, Cornell has dabbled in Star Trek reading guides, and the end of Stormwatch especially issue five is notable because it's a bottle episode named not in the least for Trek episodes that take place entirely on the ship.

DC Comics does not lack for space-faring titles, especially in the last few years, but R. The Justice League may have a satellite headquarters had at one point, and might again but aren't quite right for such cosmic nor character-driven stories. In this way, Stormwatch: The Dark Side represents not just the integration of a major Wildstorm institution into the DC Universe, but also a new kind of title for DC Comics proper, of the kind it may not have ever seen before. The Dark Side does not excel -- like Justice League International , this is a functional story but not until the end does it really begin to do anything different -- but it's a pleasure to see the Authority characters again, and front-and-center and in the DC Universe sandbox.

That alone ought be worth even the most cynical reader giving this one another volume to really find its feet. Be here! Email This BlogThis! Get the Collected Editions scoop before anyone else -- on Facebook! Enjoyed this post? The best way you can support Collected Editions is by sharing it with others! Collects Stormwatch 1st Series On their first off-planet mission, StormWatch has to prove itself, but a run-in with the Kollective threatens to force Stormwatch to seek help from intergalactic criminal Lobo.

The power of the Kollective reveals secrets about Midnighter and Apollo's origins and threaten to destroy Stormwatch from the inside out.

Collects issues Collects Stormwatch 1st Series and Stormwatch 2nd Series An exciting trade paperback collectting issues from writer Warren Ellis' run on StormWatch collects two classic adventures of the team that would evolve into The Authority! When Apollo and Midnighter go missing, one of the Shadow Lords reveals a mystery, one that will shock the team to its core!

Collects StormWatch DC 0 and We buy tens of thousands of comics a month. It is very important to us.

We will take great care in processing your order. Stormwatch 2nd Series Art by Tom Raney and Randy Elliot.

Collects Stormwatch PHD 5 and Written by Christos Gage. Cover by Mike McKone. Will the investigation tear StormWatch apart from within?. Item is new and in great condition. Color trade.

Every Day Is Like Wednesday: Review: Stormwatch Vol. 1: The Dark Side

On their first off-planet mission, the new StormWatch has to prove itself. The power of the Kollective reveals secrets about Midnighter and Apollo's origin and others that threaten to destroy Stormwatch from the inside out. Results Pagination - Page 1 1 2. Sponsored Listings. 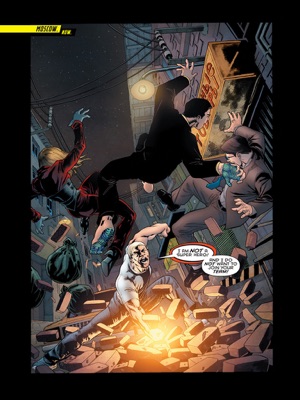 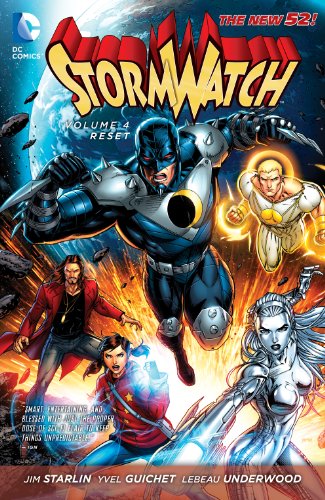 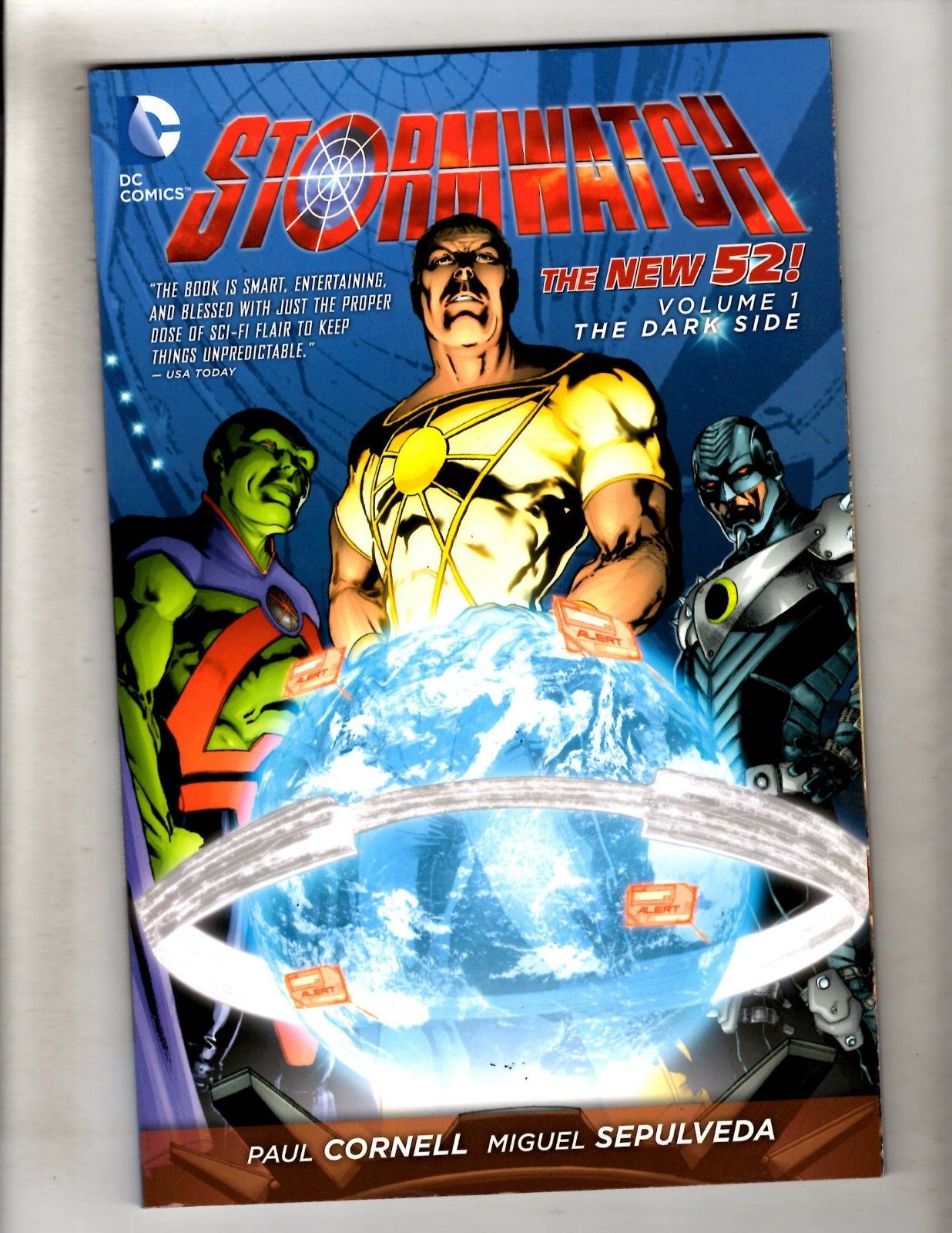